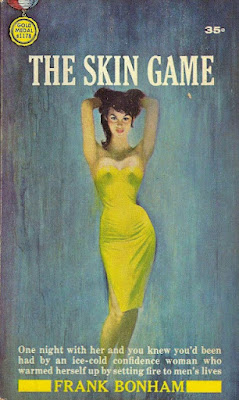 Frank Bonham (1914-1988) is best remembered as an author of young adult fiction and westerns from the pulp era into the advent of paperback originals. However, he also authored three crime novels, including The Skin Game, originally released by the prestigious Fawcett Gold Medal imprint in 1962.

Our main character is a former cop turned Parole Officer named Sam Garrett. He’s provided the task of supervising a parolee named Gene Foreman, a man Sam knew years ago when they were both police officers. Gene is technically a sex offender who was recently released on parole from prison after serving 26 months. It’s not as bad as it sounds. He was consorting with a girl who said she was 19 but was actually 17 and - boom - he’s automatically a statutory rapist.

A cop named Donovan has a real hard-on for Gene and wants to bring him in as a suspect for a recent sex crime. Sam doesn’t think Gene did it, but is duty bound to bring his old friend in for police questioning. The problem? Gene abandoned his apartment and is nowhere to be found. Parole Officer Sam needs to locate his old friend before he violates the terms of his parole and further cements his status as a suspect in Donovan’s investigation.

The stakes escalate exponentially when the police learn of a sexual thrill-killer who gets women to pose for naked photographs before brutally murdering them. With Gene completely off the grid, the police naturally gravitates to him as a suspect. Is it possible that this ex-cop has a screw loose and is indiscriminately killing sexy babes while on parole? That’s one of the mysteries encapsulated in this 160-page paperback. There are some unexpected twists along the way, and the novel isn’t always about what it seems.

For a guy who only dabbled in the Fawcett Gold Medal style of crime noir fiction, Bonham nailed the style and plot structure very well. There was plenty of sexual titillation, and characters who aren’t what you think they are. The Skin Game has never been reprinted, and that’s a darn shame because it’s a solid example of what made mid-20th century paperbacks something really special.