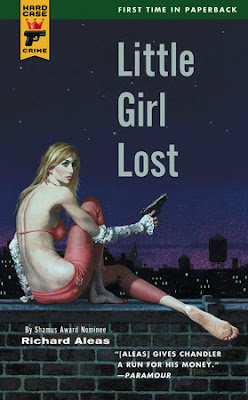 The paperback opens with Blake remembering Miranda Sugarman, the sweet neighborhood girl who took his virginity years ago. She left Blake behind after high school to attend a university with a goal to become a doctor. Blake learns of her death from an exploitive newspaper headline reading, “Stripper Murdered.” Without a client, he decided to investigate her death and gain a better understanding of his former friend’s life and death.

One of my favorite elements of the set-up is Blake’s boss in the PI firm, a much older ex-cop named Leo, who plucked Blake out of college and mentored him in the investigation racket. He’s the perfect, world-weary antithesis to Blake’s youthful idealism and quest for justice. He’s also well-connected within the NYPD and a great asset to Blake’s side.

The trail to the truth takes Blake into the behind-the-scenes world of seedy NYC strip clubs. It’s a fascinating look behind the curtain as Blake encounters a conspiracy of dope, missing college girls and much more. Blake is a fallible hero who takes more than a few beatings, but is always smart, capable and upbeat. His narration moves the plot forward at a good pace and is never boring.

Ardai is a much better writer than I was expecting, and Little Girl Lost was a solid, workmanlike private eye mystery with plenty of twists leading to the satisfying solution. It’s an easy recommendation, and I look forward to reading the sequel, Songs of Innocence, from 2011.