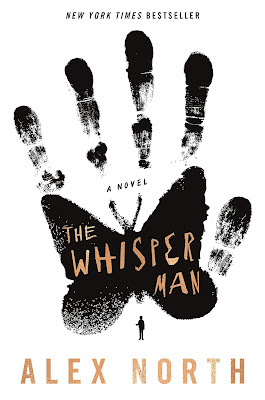 Steve Mosby is a British author that specializes in crime-fiction and psychological suspense. He's often compared to Scandinavian writer Jo Nesbo with his emphasis on grisly serial killers and rapists. Since 2003, Mosby has authored 11 stand-alone novels, but in 2019 he also began using the pseudonym Alex North. After seeing the North name in retail stores like Target, I finally decided to read The Whisper Man. It was published in 2019 by Penguin and exists in physical, digital, and audio formats.

What's interesting about The Whisper Man is that it blends first and third-person perspectives into the narrative. Further, it focuses on two murders that happen 20 years apart. These elements expand the storyline and allow for some interesting ideas and plot twists. It isn't a standard crime-thriller because Mosby uses the Alex North pseudonym to purposefully add a supernatural aspect to his stories.

20 years ago, the British village of Featherbank was terrorized by a child killer deemed “The Whisper Man.” The killer, Frank Carter, gained infamy by whispering to children at their bedroom windows. Eventually, a homicide detective named Pete cracked the case, sending Carter to prison for life and all of the bodies recovered except one. Over two decades, Pete has tried to find the body to no avail. He frequently visits Carter in prison in a cat and mouse chess match to learn where the body is. Carter's superiority as the prison's pseudo-leader gives him an arrogance that Pete can't break. Thus, two decades of mental battles have left Pete semi-retired, divorced and recovering from alcoholism.

Now, a homicide detective named Amanda has been handed a new case that has the characteristics of the Whisper Man murders. A young boy was killed and dumped near a rock quarry in Featherbank. In questioning his parents, Amanda learns that the boy told his mother that he heard whispers outside of his window the week before. In looking into Carter's case, Amanda asks Pete to join the investigation as a consultant based on his experience with the killings.

While this is happening, a recent widow named Tom moves to Featherbank with his young son Jake. After settling into the new house, Tom starts to notice that Jake is having conversations with an imaginary friend. From Jake's perspective, readers learn that this imaginary friend is a young girl who may have ties to the house and its original owners. Things get creepy when Jake tells Tom about “the boy in the floor.” When Tom hears strange whispers in the house, he begins to suspect that someone is after his son.

Obviously, there's a lot going on in The Whisper Man. The book's opening act explains the current mystery and the murders from 20 years ago, so I felt fully invested in how these were connected. Tom's backstory with the emotional death of his wife and his insecurity in raising Jake as a single dad was really effective. When Pete is introduced, readers gain perspective from his vantage point as well. I wanted to learn more about Amanda, but North quickly shifted her to a supporting character.

As a horror novel, the author succeeds in creating some extremely unsettling scenes. The whispers in the house, Jake's “imaginary friend”, the boy in the floor mystery as well as the whole idea of a serial killer preying on children from their window were truly terrifying. As a crime-thriller, in the vein of James Patterson, it's mostly just a pedestrian by-the-books investigation – interview the families, look into the past homicides, interview key characters in prison, and introduce flawed characters looking to redeem themselves. It's nothing you can't find on any prime-time network television show. But, it works well when combined with the concept of something supernatural taking place.

Based on my reactions to this book, I plan on reading more of Steve Mosby's stand-alone thrillers as well as his other Alex North novel, The Shadows (2020). He's a good storyteller and at the end of the day, that's really what we are looking for.