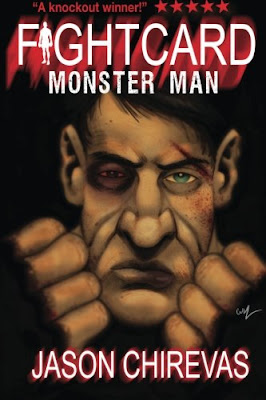 In 2011, authors Paul Bishop (Lie Catchers, Penalty Shot) and Mel Odom (The Executioner, Hellgate) each wrote and self-published a pulp-styled boxing novella. The books were so well received, a brand was created called Fight Card. Various authors would try their hand at crafting a 25,000-30,000 word novella centralized around boxing in the 1940s and 1950s. The ebooks were published under a house name of Jack Tunny with physical editions printed with the author's real name. The brand created spin-offs like Fight Card MMA, Fight Card Now, Fight Card Luchadors, and even Fight Card: Sherlock Holmes.

My introduction to the Fight Card series is an installment called Monster Man. It was authored by Jason Chirevas and published in 2014. It has also been included in a three-book omnibus titled Under the Lights and Heat, a collection of three connected Fight Card novellas written by Chirevas. In 2019, Chirevas contributed a short story to Paul Bishop's collection Bandit Territory: Ten New Tales of Murder & Mayhem and he created and authored the western series Ames & Fyre.

Monster Man, set in 1953, stars a talented young boxer named Ben Harman. He grew up an orphan in St. Vincent's home for boys in Chicago. After the Army, Ben found that he was a gifted and natural boxer. Rising in the ranks of the fight game, Ben meets an unlikely fate one night in Albuquerque, New Mexico. His powerful right hand fatally injures his opponent in the ring. The death leads to Ben's removal from the big-time fight game.

The narrative then moves to Toronto and readers learn that Ben is now paired with his old friend Pete. Together, the two are running a fight scam from city to city. The gimmick is that Ben fights in amateur bouts and he either takes a dive (pretending to be knocked out so he loses) or he runs a hustle and fakes that he is brand new in the fight business, then proceeds to knock out the city's local champ. Either way, Pete makes the bets depending on the scam, and the two pocket the money evenly. The catch is that they can't be seen together and they have to conduct business east of New Mexico so no one will recognize Ben as a former pro. But, where does “Monster Man” fit in?

Ben is suffering from the early onslaught of acromegaly, a disease in which an individual's hands, feet, forehead, nose, and jaw grow disproportionately due to an increased hormone growth. You may remember WWE Hall of Fame legend Andre the Giant as the most famous human to have acromegaly. But, there was also 1933 world heavyweight boxing champion Primo Carnera, which influenced the author's decision to write the main character in this way. Throughout the story, Ben researches the disease in all of the town libraries he visits. He also reads up on Carnera's condition. Ultimately, Ben begins to suffer severe pain in his wrists and hands and he fully understands what his future entails.

Monster Man absolutely shines like a classic mid-century crime-noir, fitting in the most rudimentary staples that the genre possesses – gambling, criminals, romance, money and an examination of the average human condition. Like Clark Howard's masterful 1967 crime-fiction novel The Arm, Monster Man emphasizes the gambling addiction – bad, worse, and worst – but introduces a love interest that steadily begins to chip away at the criminality factor. The “monster” isn't Ben, it's the game. In a clever twist, Ben falls for a prostitute named Vicky, a once beautiful, aspiring actress that now has a physical flaw. Ben and Vicky share the same imperfections, and they are both caught up in a life of crime.

I read a lot of fiction, from the greats to the aspiring authors that still have some rows to ho. In my experience as a reader, Jason Chirevas proves that he is truly something special. He has a unique talent to convey so much emotion and drama in his wording. I felt invested in the characters and sympathized with their predicament. There's no easy way out, and Chirevas' doesn't short-change anything.

Monster Man is gritty, entertaining, and wildly unpredictable. It caters to boxing fans, crime-fiction readers, and anyone that just loves an engrossing story. While I hung on to the ending for dear life, I'm relieved to know that Ben and Vicky's story continues in the 2015 follow-up Job Girl. Look for my review of that in the coming days.

You can buy Monster Man as a Kindle stand-alone ebook HERE or the omnibus Under the Lights and Heat as digital or physical HERE.