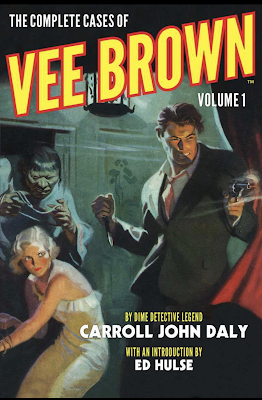 Vee Brown starred in 18 violent mini-novels between 1932 and 1936 in the pages of Dime Detective Magazine. The stories were authored by Carroll John Daly, the inventor of hardboiled crime fiction and his popular Race Williams character. Steeger Books has released two volumes of Vee Brown novellas comprising the entire series run. I sampled two of the stories from the first compilation to get a taste for the character.

Vee is a violent gun-toting police detective who is also a mild-mannered and educated Tin-Pan Alley songwriter of sentimental tunes — a secret side-hustle that brings the supercop tremendous wealth. Think Cole Porter or George Gershwin with a taste for justice and criminal blood. The Vee Brown stories are narrated by a newspaper reporter named Dean Condon who shadows Vee on the job and writes about his adventures for the paper.

I started at the beginning with the first Vee Brown adventure - a short story called “The Crime Machine” from 1932.

As the novella opens, reporter Dean Condon is preparing to meet Vee and ride-along with him for a newspaper article. Condon is nervous because Vee has earned a reputation as the most relentless hunter and killer of criminals on the police force. When Vee and Condon meet face-to-face, they make the connection that the two knew one another back in college as passing acquaintances.

Because “The Crime Machine” is the series intro, it exists to establish the Holmes-Watson relationship between the crime-fighter and his sidekick documentarian - a dynamic that persists throughout the entire series. As such, the plot is rather thin - like a TV series pilot episode.

On their first outing together, they are hunting Killer Regan, who shot up a theater during a robbery murdering a female cashier. Vee’s orders from the District Attorney’s office is to produce Regan dead or alive. On the prowl, Vee is stealthy as The Shadow — seeming to disappear while infiltrating the criminal’s lair with a perpetually-amazed Condon in-tow.

There’s plenty of tough talk and violent pulpy action to enjoy - as well as the big reveal where Condon learns that the deadly hero is also “The Master of Melody” who publishes popular sheet music under his given name of Vivian. Despite the simplicity of the plot, the short-story was a total blast and left the reader hungry for more.

“The Price of Silence”

The ninth Vee Brown adventure is “The Price of Silence", the final story in Volume One of the Steeger Books collection. It’s a 50-page novella from 1933 published when Daly had hit his stride with the series.

The story opens with the crime scene investigation of a wealthy woman stabbed in the chest in her own home while her husband slept upstairs. Because it’s 1933, a police inspector comments that such things are to be expected in the city’s Italian neighborhood, but not in the victim’s upscale community.

Fortunately, the killer left behind a calling card identifying himself as “The Black Death” which seems like a decent lead for Vee to launch his investigation. He quickly deduces that the victim was likely a blackmail victim who failed to pay off her tormenter resulting in death.

Vee quickly identifies a suspect for the murder - a society dandy behind a gang of racketeers handling the dirty work of shaking down the blackmail victims. Vee’s plan is to squeeze the henchmen with death threats until they identify their boss.

As the narrator, Condon finds himself at the center of the action when he is held captive by the thugs awaiting Vee’s return. When they reunite, Vee and Condon follow leads through a rather convoluted mystery plot leading to the exciting confrontation you always knew was coming.

I enjoyed these two Vee Brown stories enough to continue with the series in the future. Steeger Books have released a second volume compiling the final nine novellas. I’m looking forward to checking them out. Recommended.