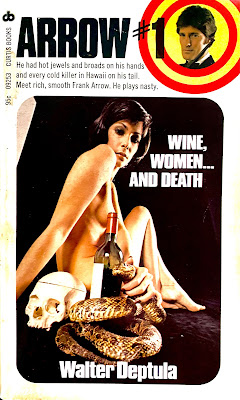 According to his website, Walter Deptula Jr. graduated from Columbia University and became both a Naval Aviator and an educator at California community colleges. Along with acting, writing, and producing community theater, Deptula also authored a six book series of men's action-adventure novels in the 1970s. The Arrow series stars Franco Arronelli, known as Frank Arrow, as a professional thief living in Hawaii. The debut, Wine, Women...and Death was published by Curtis Books (a subsidiary of CBS) in 1974.

As a young man, Arrow worked the beat in Staten Island as a patrol officer. During a bank heist, Arrow is shot in the leg while fatally shooting the thief. During the struggle, Arrow swiped $4,000 from the bank drawer. Being wet behind the ears, Arrow buys a new car and is eventually kicked from the force. Arrow then develops a long career as a self-employed thief. He is paid by clients and insurance companies to steal back stolen goods – a thief of thieves.

In the backstory, readers learn of Arrow's most recent undertaking, but it's only later in the novel that the events are explained in detail. A criminal named Serranto, possibly working for someone, robs a prominent jewelry store. After the successful heist, Serranto hides the jewels in a tomb on a large New York estate. The insurance company hires Arrow to find the jewels and agrees to his 25% commission fee. But, Arrow learns that some of the jewels are ancient relics traced back to an early English empire. If he can retrieve the jewels, his commission will be an extremely lucrative payout.

Deptula's middle chapters are dedicated to Arrow's preparation and planning to retrieve the stolen jewels. These chapters were written so well and reminded me of great mid-20th century heist fiction by the likes of Dan Marlowe and Lionel White. In these chapters, Deptula absolutely shines. I loved the setup, planning, disguises, team players, and ultimately the execution. It's not imitation, but clearly the author was influenced by the crime-noir masters.

Surprisingly, Wine, Women...and Death isn't just a heist novel. Instead, the events of the heist lead Arrow into an underworld of bloody violence. Someone on Arrow's team sells him out to Serranto and his fiance is murdered. In a desperate bid for revenge, Arrow must not only find and kill Serranto, but also discover who the real mastermind is. It's this part of the book that is simply a product of its time. This is straight-laced, 1970s gritty action that is probably spawned by Mack Bolan and countless other paperback vigilantes of the era.

I loved all of the little nuances that are associated with the character. Arrow lives in a beach-side mansion and possesses all of the luxuries one would expect – private plane, helicopter, employees, a compound and a pet shark (which plays into the book's finale). While not completely over the top with gunplay, the book still packs a serious punch in terms of action-oriented fight scenes. The author's presentation of Arrow and his fiance was really important and added a personal investment for me. I wanted Arrow to kill the SOBs that tortured and killed his lover. The book made me feel something, and that's always an important factor.

While this series mostly receives lukewarm reviews online, I can honestly say I thoroughly enjoyed the debut. I hope to borrow or buy the final installments. In reading the author's online comments about the series, I learned that six total books were written, but CBS shut down Curtis Books after Arrow #3 was published. The remaining books are now manuscripts that I'm sure Deptula is still hoping to publish someday. Anyone interested in releasing this trio of original novels, plus three unpublished works?