The Haunting of Ashburn House 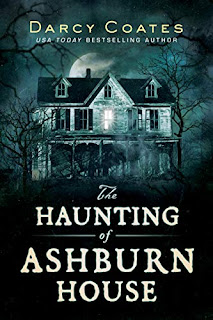 In 2012, author Darcy Coates self-published an e-book horror novella titled Once Returned. This kick-started a self-publishing career that lasted 22 novels. She eventually signed with mystery imprint Poisoned Pen Press, which bought up the rights to all of her self-published work and made her bank account swell. Her novels mostly consist of young characters in their 20s dealing with the supernatural, often in a haunted place. From a sky level view, she is capitalizing on the 1960s and 1970s gothic suspense novels for atmosphere and imagery. But unlike those vintage “women running from houses” books, Coates switches out the romantic angle for a scarier approach. I was curious about her brand of horror after seeing stacks of her novels at my local Barnes & Noble. But, instead of laying down a hard-earned $15, I borrowed a friend's copy of The Haunting of Ashburn House. It was originally self-published in 2016 and now exists in multiple formats through Poisoned Pen Press.

Like a William Ross novel, the book begins with a familiar genre trope. Financially strapped, young Adrienne learns that her mother's grandmother's sister's daughter Edith Ashburn (that's a great aunt for those constructing an org chart) has bequeathed a large Victorian house to her. Adrienne, nicknamed Addy, arrives in a very small town with her cat Wolfgang and $50. Upon entering the little province, she finds a lot of staring eyes. Later, she learns that the house she has inherited is believed to be haunted and many of the town's citizens believed the prior owner was wacko.

Addy's new home is 10-miles outside of town and nestled in a deep blend of forest and fields. Only the first floor has power and there is no cell coverage (and 20-yr old Addy doesn't own a phone). The upstairs is rather spooky with a lot of rooms and darkened halls due to the lack of electricity. Perhaps the strangest thing is that Edith has carved bizarre messages into the walls like, “Is it Friday, Light the Candle” or “No Mirrors”. Needless to say, strange things begin happening immediately. The power downstairs is shut off numerous times in the night, portraits seemingly come alive, and a new acquaintance is nearly killed. Oh, and zombies.

If you've watched the cult horror flick Evil Dead 2, then you'll love your 350-page stay in Ashburn House. The wacky scenes of a corpse doing bizarre things reminded me of the unusual movements performed by Sam Raimi's characters. But, it's not designed to be funny. At least I don't think it is. The mystery is compelling with a backstory that kept me motivated to flip the pages. I didn't particularly like Abby and chastised myself for hoping she would be injured or hurt more. Coates makes her too vulnerable and weak when faced with stiff opposition. Sure, she's the hero, and by the book's end, she's a real sweetheart, but her judgment and behavior left me a bit deflated.

I'll probably try another of Darcy Coates' books in the near future. I'm hoping there is a better result than this one. Haunting of Ashburn House is just below average when it comes to a spooky haunted house novel. But, I would imagine it is appealing to the young adult crowd. As an introduction, this is a training bra in preparation for more visceral horror ahead. It's a catchy cover and title, and God knows there are stacks of her books in the retail shops to pave the way to King, Keene, Malfi, Bates, etc. Cheers to that.