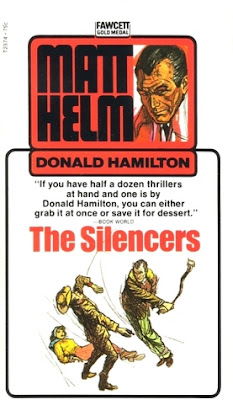 Matt Helm is starting to stir the place up. After dismissing the first two installments of this Donald Hamilton spy series, I knew I owed it to myself to just keep reading these titles. Thankfully, the author's western traditionalism elevated the third book, The Removers, and I found myself liking it. While I've always been critical of Helm's actual heroism, I still love Hamilton's hard-boiled storytelling. The dialogue is snappy, the complex wrinkles of international espionage are smoothed over, and these stories seem to improve more and more. Needless to say I was happy to pursue the series fourth installment, The Silencers. It was published by Fawcett Gold Medal in 1962 and now exists as a reprint in physical, digital and audio.

On the last page of The Removers, Mac instructed Helm that his next assignment would involve a rural mountainside retreat. In the opening pages of The Silencers, Helm has completed this mission (details were never revealed) and is now on his newest job in New Mexico. Mac instructs Helm to cross the border into Mexico to extract a female agent code-named Sarah (she was a minor character in the series debut, Death of a Citizen). There, he teams up with another agent named Pat LeBaron to find Sarah working as a stripper in a rowdy bar in Juarez. After making eye contact with Sarah, the room explodes in violence as she is fatally stabbed (mission failure) and LeBaron is shot to death (secondary mission failure). But, Helm manages to get Sarah's sister Gail to safety.

In talking with Mac, Helm learns that Sarah had sold-out the U.S. to become an asset for a foreign enemy. Upon her death, she had a microfilm of stolen secrets ready to provide to the enemy. Luckily, Gail has the microfilm and Helm seduces her out of her clothes to find it. In a motel room, Helm is attacked by two bad guys, but learns they are working for another U.S. agency that doesn't necessarily want to coordinate their efforts with Mac's department (CIA vs FBI feud).

Mac advises Helm that the main bad guy is a spy named Sam Gunther, a man Gail describes as a smooth talking cowboy. The two pursue Gunther into Carlsbad, California and learn that he has aligned with top scientists to launch a missile into a group of politicians and scientists running highly-publicized seismic tests in the area. Got it? It took me a while. But, all of this is told in a rapid-fire pace that places Helm in fights with various foreign agents and an awesome finale in an old ghost town church.

There's nothing to dislike about The Silencers and, once again, the series shows improvement. In a minor way, this Helm assignment was like a Nick Carter: Killmaster installment with the layers of over-the-top action and stereotypical criminals. There's a little more comedy inserted in between fights, leading some fans to believe Hamilton was displaying a fondness for Richard Prather. I could sense some similarities, but Helm is a far cooler character than silly 'ole Shell Scott.

The Silencers is another great installment to this highly respected series. Helm and I started off on the wrong foot, but after that mess with his wife (The Revengers), I'm starting to like this guy. Hamilton writes with conviction and energy, and doesn't necessarily drown the reader in details. He does just enough to make Helm a hero, but doesn't overdo it. The end result makes it a fantastic reading experience and a worthy Bond opponent (if the literary world needed one).