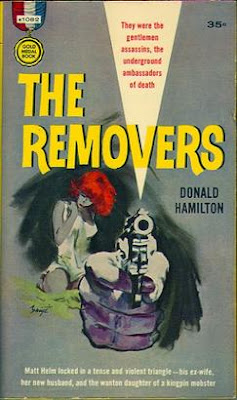 Ian Fleming's mega-star James Bond influenced a number of spy fiction titles, including Assignment and Nick Carter: Killmaster. One of the most popular is the Matt Helm series authored by Donald Hamilton. It ran from 1960-1993 with 27 total books. I was lukewarm on the series first two installments, but the character still intrigued me enough to warrant further pursuit. I grabbed a copy of The Removers, the third installment of the Matt Helm series. It was originally published by Fawcett Gold Medal in 1961 and remains readily available today in audio, digital and physical reprints.

In Death of a Citizen, the series debut, Helm is married to a woman named Beth and has three children. He's a former OSS agent (the early CIA) that established a writing career and a sense of normalcy after retirement. But, events drag him back into the spy business and he rejoins his former department. I didn't particularly like the book, despite its enormous popularity, and felt that it was incomplete. The idea that Helm simply left his wife and kids (and has an affair nonetheless) didn't sit well with me. Thankfully, The Removers circles back to his family and completes the origin tale in its entirety.

The Removers begins by explaining that Beth Helm is now remarried and lives on a cattle ranch in Reno, Nevada with her kids. She's now Mrs. Lawrence and her husband is a British chap that has a shadowy past. Helm receives a letter from Beth asking him for a favor. Thus, the opening chapter has Helm in Reno preparing for an uncomfortable meeting with his ex-wife. However, Helm also receives word from his boss Mac that a young agent is working an assignment in Reno and may need a light assist.

Helm learns from Beth that her husband was involved in a prior business similar to Helm's. Because of some sort of past event, shady people are threatening the family. Helm takes it all with a grain of salt until he meets Beth's husband Logan. Helm's theory is that Logan isn't really British, but is legitimately some sort of skilled professional capable of defending Helm's kids and ex-wife. In fact, Logan politely, but sternly, advises Helm to leave the ranch and never look back.

The star of the show is Moira, a young and sexy woman that physically distracts Helm. The two get it on, and in doing so Helm learns that Moira is the daughter of Big Sal Fredericks, a Reno mobster. Fredericks is employing a foreign spy/enforcer named Martell, a man that Mac warns Helm about. After learning that Logan Lawrence is a former gun for Fredericks, Helm begins to connect the dots. Logan left the business, but Fredericks needs him for one more run to Mexico to recapture stolen heroin. Logan refuses, thus the not-so-gentle rub.

All of this ties in beautifully and creates a really engaging story. Helm engages in some awesome dialogue, never comically witty, but maintaining a hard-edged coolness. The action scenes are fairly swift and keep the narrative flowing into a much longer finale that is soaked with violence. Oddly, it was told with a sense of western traditionalism. The hero rides to the rural cabin in the woods to fight the unruly bad guys that have raped and captured his woman. But, that hero isn't really Helm.

In a clever way, Hamilton mirrors Helm's origin story by telling a similar tale with Logan Lawrence. In this case, Lawrence is the one married to Beth and is called back into action after violent events begin to intrude into his retirement. Arguably, Logan is the real hero.

My main beef with Matt Helm is that he personifies the hardened tough guy. He talks tough, his first-person perspective is menacing, and he genuinely has old war stories or missions that he shares to validate his callous command. But, he never actually does much fighting. In the first two books, Helm doesn't really get the job done and people unexpectedly die. In this book, Helm watches Moira get abused by two women until her own dog makes the save and kills the would-be-rapists. Helm is knocked in the head outside of his motel room and then captured by Martell and Fredericks.

In the finale, Logan is shot in the leg and placed on the sofa. Helm is tied up and has to listen to his ex-wife being raped in the next room. He has the audacity to question why one-legged, bleeding Logan isn't doing anything about it. The book's rowdy conclusion has Logan saving Helm's life. But, for whatever reason it all just works and Hamilton's prose is so damn cool. I loved the timeline and pacing, the brilliant conclusion of Moira (the obligatory spoiled sex kitten), Beth's neediness, the escalated violence, and Logan's expertise in disposing of the bad guys. Helm should have been the hero (and maybe he is somehow?), but I can settle for him as a co-partner.

I've already started the fourth volume, The Silencers. In the opening chapters, Helm is sent on a mission to Mexico to save a female agent. Wouldn't you know it...she's stabbed to death in front of him. But, it's written so well that I don't even care how inept the hero is. I'm sure an alternate hero will rise to the occasion.