A Handful of Hell: Classic War and Adventure Stories by Robert F. Dorr 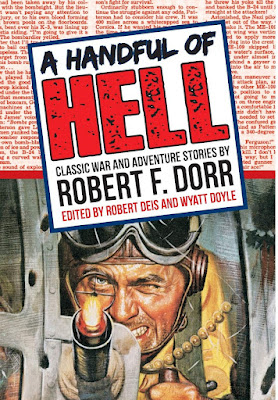 Back in 2016, Robert Deis and Wyatt Doyle teamed up for a book titled A Handful of Hell: Classic War and Adventure Stories by Robert F. Dorr. It is part of the duo's The Men's Adventure Library, published by New Texture. We've covered a number of these volumes, including I Watched Them Eat Me Alive, Barbarians on Bikes, and Cuba: Sugar, Sex, and Slaughter. Deis remains active with this project as well as his Men's Adventure Quarterly publication co-edited by Bill Cunningham.

In A Handful of Hell's opening pages, Deis explains that he had received an email message from Dorr in November, 2009 concerning the recently-launched MensPulpMags.com blog. Dorr had explained, with exclamation, that he wrote hundreds of articles for the men's pulp adventure magazines and wasn't aware that there was still a large fan base for those vintage publications. Deis was aware of Dorr's work and the two struck up a friendship which led to the creation of this book.

The book includes a 20 page chapter written by Dorr titled “My Plan Was To Be a Writer and an Adventurer...” Dorr writes that he had two main interests since childhood, the Air Force and writing. His first paid publication was in Air Force Magazine's November, 1955 issue. Although he couldn't be an Air Force pilot due to a hearing impairment, Dorr still served in the military in a very unique role. He enrolled in Army Language School and studied the Korean language for 20 months. He was then sent to Korea to listen to North Korean radio communications between 1958-1960.

After his military stint, Dorr actively pursued writing and sold “The Night Intruders” to Real for their April, 1962 publication. He states in the book that this was the first of what became several hundred men's pulp adventure stories. Thankfully, Deis and Doyle include the story in this volume. In fact, the duo collected 17 stories (by my count) that are written by Dorr and culled from vintage magazines like Stag, Man's, Bluebook, Male, Real, and Man's Illustrated. Handful of Hell also includes color scans of the magazine covers and interior artwork that accompanied these original stories. That in itself makes the book wildly entertaining, but I'm a reader and here are a few short reviews of included stories.

This story was featured in the June, 1967 issue of Men. The setting is South Vietnam's Ia Drang Valley, a hotbed of violence controlled by The People's Army of North Vietnam. San Diego native Sid Reeder and his crew plunge into the valley when their chopper is shot down. As the helicopter lies upside down, the soldiers inside formulate a plan. The enemy forces are descending from the hillside to destroy what's left of the downed chopper. They have to choose whether they want to call in support and risk another chopper being shot down or just call in the coordinates and go on killin' and dyin'. When Reeder thinks about the helicopter's two ground-to-air rockets, he comes up with a new plan. I loved the story and the frantic pace in which it is told. Dorr showcases a distinct understanding of helicopter aviation and protocols and is able to transport that to the printed page in a way that isn't technically jarring for the reader. This was such a great story.

“The POW General Who Tried to Kill Himself”

In the November, 1965 issue of Man's, Dorr tells this real-life account of U.S. Major General William F. Dean's harrowing ordeal as a prisoner-of-war in North Korea. Dorr explains to readers that Dean was on the run through the Korean countryside after narrowly escaping incoming enemy forces. Separated from his men, Dean's journey took him through jungles, fields, and villages desperately searching for food and medial supplies. Eventually, he's betrayed by a Korean and turned over to the North Korean People's Army. After months of starvation, dehydration, and lack of medical treatment, Dean reached the point of physical torture. After endless rounds of interrogation, for weeks and weeks, Dean is instructed that he will be tortured to gain information about American forces, locations, and strategies. Dean knows that he has reached a tipping point where he may divulge information under the harsh treatment. His only rescue is suicide. Honestly, this is really a tough story to read considering the levels of violence and torture. However, Dean's real life account is vividly told by Dorr as a tribute to his perseverance, patriotism, and internal fortitude. Dean is an American hero and I love that Dorr had the courage to write this. It's a true testament to human endurance and honor. Note - For more information, read Dean's autobiography titled General Dean’s Story.

Stag, January 1966 featured this WW2 aviation story about a solo run by a lone B-17 bomber piloted by Captain Barry Helm. His mission is to utilize thick fog to make a daring bombing run on a German base. By targeting a large fuel supply, the bombing can create maximum damage to the Germans. But, in order to execute this nearly impossible assignment, the bomber must enter the airspace at tree level. This avoids field-swept radar that picks up higher elevation aircraft. Combining the low entry level with the thick fog makes it a valiant opportunity to strike a major blow to the German offense. This is just a classic, simple aviation tale that utilizes Dorr's descriptive storytelling. I liked the story's presentation from both the American forces as well as the Germans. In a short story, the narrative's presentation of events in the air and on the ground was just so epic and compelling.

You can buy this book and other collections HERE. Don't forget to check out Men's Adventure Quarterly for even more fantastic vintage stories and artwork.