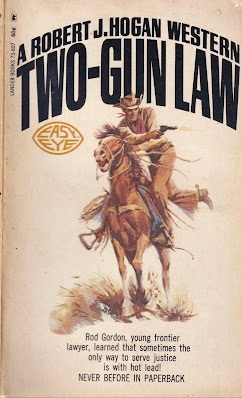 Robert J. Hogan (1897-1963) is mostly associated with his creation of the pulp-aviation series G-8 and his Battle Aces. After serving in WWI, Hogan worked in the aviation industry while writing for the pulps from 1930 through 1957. It's hard to locate information about Hogan's work beyond G-8 or his Smoke Wade creation. But, Hogan wrote a number of original western paperbacks like Brand of Cain, Renegade Guns, and Two-Gun Law. Pageturner's Buckskin Editions imprint have reprinted six of Hogan's western novels as affordable ebooks including Two-Gun Law. It was originally released as Law for La Mesa, a complete novel featured in Giant Western October, 1950. Lancer later reprinted it in paperback as Two-Gun Law.

Rod Gordon was born and raised in the southwestern frontier town of La Mesa. Growing into an adult, Gordon had become a fast gunman and a reckless youth. To stop Gordon's inevitable criminal path, his father sent him back east to study law. Maturing, and learning the mantra that “every man is innocent until proven guilty”, Gordon returns to La Mesa to begin his law practice. His first client is an elderly man named Blue Harmon.

Harmon explains to Gordon that his ranch is being seized by the town bank, specifically a man named Colonel Ball. Harmon has paid taxes and has the official rights to keep his ranch, but due to some crooked politics Ball has proven the tax receipts are missing, thus the delinquency. Harmon is now dispossessed of the ranch so Gordon takes the case pro bono. After talking with Ball, Gordon explains that Harmon simply misplaced the receipts and needs more time. Before Gordon is able to elevate the case, Harmon's foreclosure leads to a shootout. Harmon is killed and Gordon is furious.

As Gordon begins to dig into the town's most recent history, he learns that Ball has repossessed many of the ranches and farms. La Mesa's citizens have been misled, cheated, bullied, and forced into poverty due to Colonel Ball's criminality. But, Ball wants to work with Gordon and explain that the whole business is on the up and up. Further, Ball wants his beautiful daughter Maxine to marry a civilized, noble professional like an attorney. While Ball plays matchmaker for Gordon and Maxine, the town turns on Gordon. They think Gordon has sold out to Ball and is now a part of an evil criminal alliance.

Hogan's western falls into the genre's trope of “land baron takes over the town.” Hundreds of stories and books fall into this category, but Hogan's writing style is exceptional because he molds it into a compelling crime-noir. Two-Gun Law reads like a Clifton Adams novel (oddly Adams also has a western with the same title) with the traditional western formula laced with crime-fiction elements. There are some footprints of Hogan's pulp writing as the characters display a seemingly supernatural ability to shoot precisely. But, it never really interferes with the story. I love the little nuances that the author includes.

When Gordon finds the corpse inside Harmon's house, a nearby neighbor named Loony is playing a mouth harp and singing "The Dying Cowboy" (also known as "Cowboy's Lament"). Readers immediately think the song represents Harmon's death. But, in brilliant foreshadowing, the song is really a prophetic tune for Loony himself. I also really liked that Gordon, the wild-and-woolly gunman turned attorney, hangs his six-guns on his office wall. As the town turmoil increases, Gordon retrieves the guns from the wall and reflects how heavy they seem now. It's a parallel to Gordon's heavy burden as town savior.

If you have a Kindle, $3 is well worth the price of admission for Two-Gun Law. If you want paper, affordable copies of the Lancer version are still out there. As an introduction to Hogan's writing, I was really impressed with the book and I'm looking forward to reading more of these Buckskin Edition reprints.