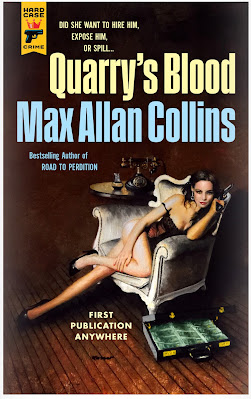 Max Allan Collins’ Quarry series about a paid assassin is probably the best series (still) going today. The books blend action, mystery, sex and humor in a perfect combination, so I was excited to read the 2022 installment, Quarry’s Blood.

As the novel opens, it’s 1983 and Quarry (age 31) is at a strip club in Biloxi, Mississippi re-connecting with a stripper he once knew named Luann (stage name: Lolita). If this rings a bell, that’s because Quarry’s Blood begins as a sequel of sorts to 2015’s Quarry’s Choice, although Collins does a good job getting the reader up to speed if you’ve never read the other novel or forgotten the particulars. Mostly, Collins is just bringing back a beloved former character and consider yourself lucky as Luann is a fan-favorite love interest for Quarry.

Anyway, Quarry used to be a normal hitman, but now he’s a hitman who gets paid by intended victims to kill other hitmen before they can kill the targets. If possible, he also investigates the situation to figure out who hired the hitman in the first place — because if you don’t do that, why bother? The upshot is that Quarry returns to Luann because his 1983 investigation indicates that a hitman is targeting his former stripper friend for extinction.

We also join Quarry in 2021 (age 69) looking back on his life and greatest hits over the years. He’s content with his life of retired solitude when a visitor comes-a-knocking. The visitor isn’t carrying a gun, but rather a notebook. She’s an author of true crime novels, and she’s pieced together who Quarry is - or was - and wants to interview him for a book. She’s aware that Quarry has over 40 kills to his name and other things about him that I won’t spoil here.

Quarry is also facing a problem of someone trying to kill him. Does it have something to do with his prolifically murderous past? Or maybe it’s connected with this true-crime journalist poking about? This leads to a lot of revisiting historical hits to learn the one that triggered the violence of the present. There’s a meta-fiction aspect the whole endeavor that will also delight series stalwarts - you’ll know it when you read it. Of course, Collins ties the past and the present together in a tidy and well-construction manner forming one multi-generational tale.

Quarry’s Blood is another excellent installment in the series, but probably not a great entry point for a new reader since there are so many references to other Quarry adventures. This one’s for the fans. There’s an afterward by the author implying that this may truly be the last Quarry novel. I’m calling on Hard Case Crime publisher Charles Ardai to figure out a way to put the screws to Max Allan Collins to ensure there are more installments forthcoming. Whatever it takes…