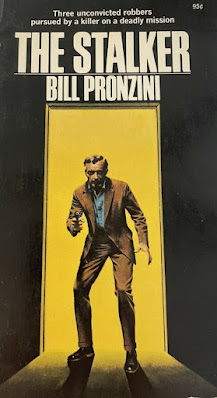 In 1971, author Bill Pronzini's first two novels were published, The Snatch and The Stalker. The former was the first of Pronzini's successful and respected Nameless Detective series. The Stalker was the first of over 30 original, stand-alone novels. After positive Paperback Warrior reviews for Panic (1972) and Snowbound (1974), I was excited to re-enter Pronzini's early 1970s era of crime-fiction. I decided to retrace his steps and begin with The Stalker.

The book begins in Granite City, Illinois in March of 1959. Six men successfully rob a Smithfield armored car transporting $750K in money from Mannerling Chemical. Aside from punching a guard, the heist is executed flawlessly and these six men become financially stable in less than 10-minutes. Readers are advised that the investigation into the robbery was unsuccessful in locating the men or the stolen money.

The next chapters feature newspaper articles from 1970 detailing the grisly deaths of three, seemingly unrelated men. These deaths appear to be random accidents, but in the book's compelling middle chapters, readers discover that these men were half of the 1959 heist crew. It's explained that three Army buddies – Conradin, Drexel, and the book's protagonist, Kilduf – planned the heist and are now the remaining members of a mysterious kill-list.

Pronzini's plot development is exceptional as he leads readers into a dramatic mystery as these three men attempt to identify their stalker. Considering the heist was perfect with no fatalities, and that law-enforcement never located a single clue, the idea that someone has found them seems impossible. But, three of their crew is dead and the list has shortened. There is a tremendous amount of urgency, which Pronzini successfully balances with the slower pace of suspense and mystery. I won't ruin the surprise, but there is another character in the novel that adds some insight to the puzzle.

The Stalker is a short novel, but Pronzini is able to develop the characters at a quick pace that doesn't detract from the story's impact. I loved the relationships between Kilduf and his frustrated spouse, as well as the summarized backstory of these three characters and the wealth they spent or invested. Pronzini is able to create this mental anguish as the characters learn of their potential fates and how their criminal pasts may now extinguish their future. Was the money worth the guilt? Was the fortune worth the mental sacrifice? I love these questions as Pronzini violently shortens the kill-list one by one.

As either a murder mystery, a psychological suspense novel, or as crime-fiction, The Stalker is absolutely fantastic. Pronzini crafts a believable heist tale, but manages to reshape it into a thrill-ride. The end result makes it a mandatory read. Highly recommended!