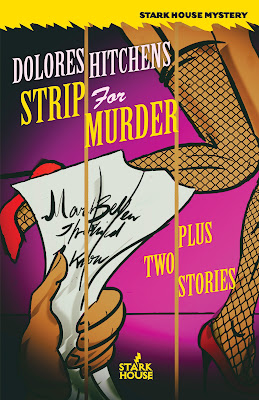 Dolores Hitchens was born as Julia Clara Catherine Dolores Robbins (1907-1973) in San Antonio, TX. After graduating from the University of California, Hitchens worked as a nurse and a teacher before turning to writing. She authored two novels starring Lt. Stephen Mayhew and 12 novels starring sleuth Rachel Murdock under the pseudonym D.B. Olsen. She also wrote under the pseudonyms Noel Burke, and Dolan Birkley. Her railroad detective fiction, co-authored with her husband Bert Hitchens, is highly respected, but using her own name, she had a remarkable career writing stand-alone mystery-suspense novels from 1951 through 1973. My first experience with Hitchens is Strip for Murder, a 130 page novella originally published in Mercury Mystery Magazine in 1958. Stark House Press has reprinted the novella along with two shorts originally appearing in Ellery Queen Mystery Magazine.

Mark Bellew is employed as a Theatrical Representative. It sounds like a respectable job title, but in essence it's the “pimp” level on the corporate ladder. Bellew markets a variety of strippers, or exotic dancers, for various parties and social functions. If you are hosting a post-golf tournament men's party (in the 1950s) at the lodge, Bellew service's may be enjoyable. There's no hanky panky hi-jinks because Bellew keeps it on the up and up - quality T&A from entertainment veterans. At least until someone is raped and murdered.

Hitchens' protagonist is an Army veteran and prior boxer named Warne that works as an insurance detective. His office is conveniently next door to Bellew's and the two are acquaintances. One day, in a panic, Bellew confesses to Warne that he is receiving anonymous, threatening letters reminding him of an unfortunate incident from 20 years ago. Bellew explains that the incident occurred when he hired a young woman for a men's party. The woman advised Bellew that she was a professional stripper and could take care of herself, but after her performance, she stayed around a little too long and was raped by one of the men. A few days later she committed suicide by jumping out of a high-rise building. The ominous letters prophetically state that the same thing will happen again.

Warne takes the case and looks into the young woman's family history and what her life was like before her suicide. The woman's father is now filthy rich and his adopted son is an arrogant macho-man with a fast car and hot wife. The son makes for a great villain and the perfect adversary for the wise, tougher, and much older Warne. But, the real investigation begins when the letter-writer's prophecy comes to fruition. Bellew's most recent booking leads to a professional stripper named Candy jumping to her death from an apartment building. Is Bellew somehow behind the two deaths? Or, do the two girls have some criminal relationship that's separated by 20 years?

Hitchens uses Warne as the hero, but she also presents separate events featuring Bellew and a determined reporter named Robinson. The mystery shapes up nicely and offers some enjoyable, yet perplexing questions. I loved the twists and turns of the plot and was slightly surprised when the killer was revealed. I also really enjoyed Warne's budding relationship with Bellew's adorable secretary.

Dolores Hitchens was the real deal and Strip for Murder is another testament that mid 20th century women mystery writers were just as talented and brilliant as their male counterparts. Hitchens creates a riveting murder mystery complete with shady ladies, fast cars, and an admirable, competent hero to uncover the hidden truth. The storytelling is violent, fast-paced and brimming with conspicuous characters that make it a memorable and pleasurable reading experience.