Bird in a Cage 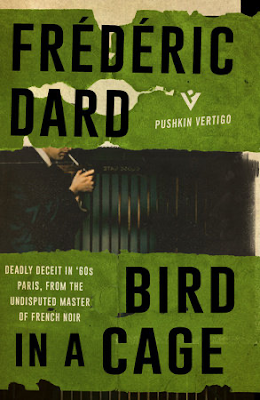 Frederic Dard (1921-2000) has been called the Harry Whittington of France because he authored approximately 300 crime-noir paperbacks during the mid-20th century using his own name and a wide variety of pseudonyms. Readers may be familiar with his 175-installment San-Antonio police procedural series that received a sizable run of English translations. A London-based reprint publisher called Pushkin Vertigo has been reprinting many of Dard’s greatest hits with crisp, new translations for modern audiences, including his 1961 stand-alone paperback, Bird in a Cage (Le Monte-Charge).

Our narrator is Jerome and he has returned home to Paris on Christmas Eve after spending six years incarcerated for the murder of his girlfriend. Arriving at his childhood home is a melancholy experience since his mom died four years earlier when Jerome was in prison. Facing the crippling sadness of a Christmas alone, Jerome decides to treat himself to a nice dinner at a fancy restaurant.

At the restaurant, Jerome encounters a woman and follows her to a movie theater. He sits next to her and holds her hand in the dark providing the poor fellow with some much-needed human contact. After the show, they wander about Paris a bit and wind up at her place headed for a sexual encounter because they are French and that’s what the French do.

Just as Jerome is about to close the deal with this mysterious woman, they enter her parlor and lying underneath the tree is the girl’s estranged husband with his head blown off. Needless to say, this throws a monkey wrench in Jerome’s big plans to get laid after six years of forced celibacy. Moreover, Jerome is forced to disclose to this new widow that he’s a newly-released ex-con (and convicted murderer) and probably not her strongest alibi.

Jerome sets out to solve the murder, and seemingly impossible things begin to happen deepening the paperback’s mystery. The solution recalled the architectural misdirection often seen in a John Dickson Carr locked-room mystery in which a seemingly perfect crime is explained through elaborate planning and execution. As a mystery, the solution worked, but it didn’t make for a particularly edgy or hardboiled novel.

The writing (or rather the translation) was uniformly great making this an enjoyable 120-page quickie. The book’s final page was abrupt and confusing, but it didn’t impact the mystery itself. Overall, I enjoyed this foray into French noir and will probably come back for more.