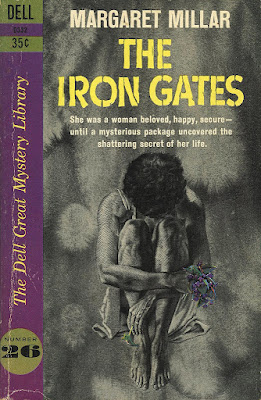 Along with her contemporaries like Dorothy B. Hughes, Charlotte Armstrong, Dolores Hitchens and Helen Nielsen, California native Margaret Millar helped solidify the presence of talented female mystery authors in the 1940s and 1950s. She wrote over 25 original novels, mostly as stand-alone works. However, her first three novels starred a Canadian sleuth named Dr. Paul Prye and she repeated that creation with another Canadian detective, Inspector Sands.

The Toronto homicide detective starred in Wall of Eyes (1943) and The Iron Gates (1945), as well as a short story called "The Neighbors Next Door" in a 1954 issue of Ellery Queen Mystery Magazine. I chose to read the latter novel based on an article by Curtis Evans (via Stark House Press) praising the book. It has been reprinted multiple times in hardcover, paperback, and most recently as an audio book. It was also printed in the U.K. as Taste of Fears.

In The Iron Gates, Millar's prose is pure psychological suspense. In the book's opening chapters, Lucille Morrow is mourning the unusual death of her friend Mildred. These scenes are beautifully written and drape the imagery in a white pane of frosted glass reflecting Lucille's loss and mental anguish. It's a hazy precursor to what eventually occurs later in the book as a historical flashback or retelling.

Later, readers learn that Lucille is now married to a retired physician named Andrew, Mildred's previous husband. She is the stepmother of his two adult, but childish, kids and the in-law to his worrisome sister, all of which reside in the same house. Due to the death of Mildred, and Andrew's replacement of her with Lucille, there are strict dividing lines in the household based on suspicions and shifting judgments. These alliances and strategic family placements play into the novel's central themes of jealousy and lust.

Inspector Sands becomes involved in the narrative when Lucille goes missing. There's early discussion between characters about a nearby park where a grisly murder took place. There's a cautionary tale told about a wandering ax-man preying on park guests. The idea that Lucille is missing, the nearby murder, Mildred's prior death and this strange ax-man all play into the mystery. Sands doesn't know what to believe and finds the family obtuse about Lucille's whereabouts. Only Andrew seems genuinely concerned about her well-being, opening up a string of guesses on which family member committed murder.

The book takes an interesting twist for the second half. Without spoiling the plot development, a major character ends up in a mental asylum behind “iron gates”. Her reason for being there is cloudy, leaving Sands and a detective to investigate the events surrounding her confinement in the asylum. Most of the book's second half does take place in the asylum as the character interacts with other mental patients and the hospital's staff. I enjoyed these parts of the story, but felt it was a little distracting at times. The behavior of the patients and their involvement in the main character's psyche definitely contributes to the story's development, but it's a marathon.

As a psychological suspense novel, Millar conveys a lot of emotion in her writing. I enjoy the shading she provides as she draws out each character for the reader to suspect. As I learn more and more about female mystery authors of the 20th century, my research always leads to Millar. She was a a real talent and sadly isn't as relevant now. Her work is mostly forgotten aside from a few reprint houses still preserving her novels. Her spouse, Ross MacDonald, the creator of the California detective Archer, is in more abundance, but honestly Millar may have been the one to read all along.

The Iron Gates was optioned for film to Warner Brothers and allegedly Millar wrote the screenplay. It was to star either Bette Davis or Barbara Stanwyck, but the film never came to fruition. This novel remains rather timeless and would make for a great modern film with it's real world complexity. My vote is for director David Bruckner (The Night House, The Ritual). Anyone have his number?