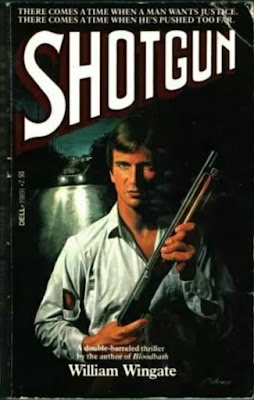 William Wingate (1939-2012) was a South African born author responsible for seven novels and a non-fiction book about winning poker. His 1980 paperback Shotgun was released as Hardacre’s Way in England and later adapted into the crappy movie Malone starring Burt Reynolds. It remains available as an affordable ebook.

Our hero is John Hardacre, a tough guy who drifts into the remote Tennessee mountain town of Baptist’s Fire. Hardacre is first encountered pushing his broken Volkswagen Beetle into the town’s service station employing the novel’s affable narrator, a 15 year-old named Lou. About halfway through the novel, the author reveals something about Lou that will knock your socks off. I’m still laughing about how clever this revelation was.

The service station is owned by Lou’s pa, and he’s receiving pressure to sell from a wealthy mobster-turned-boss hog who’s buying up the town. As pa turns down these cash offers, the pressure becomes more coercive thanks to the developer’s henchmen. All of the town’s leaders, including the corrupt and feckless sheriff, are in the back pocket of this local bossman whose lackeys are beyond justice.

As the novel progresses, we see bullies in action targeting Hardacre for harassment on the street and the spontaneous outbursts of violence increase Hardacre’s profile as a target for the town establishment’s revenge. Hardacre’s unwillingness to bend in the face of bullies puts his hosts, Lou and Pa, squarely within the blast radius for more violence.

What we have here is a fairly typical western plot transported to 1980 Appalachia. Other critics have compared Shotgun to Shane by Jack Schaefer, but the influence of David Morrell’s First Blood also shines brightly. It’s established early in the paperback that Hardacre travels with a sawed-off shotgun and you just know the weapon will be a turning point later in the book when the inevitable violence erupts.

Fans of 1980s men’s adventure paperbacks should regard Shotgun as required reading. The story of a drifter being pushed beyond his tolerable limits by bullying authorities is timeless, and the author delivers the bloodbath that genre fans will love.