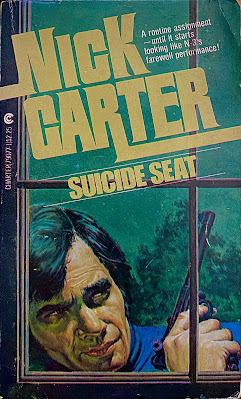 The character of Nick Carter (or Nicholas Carter) was created by Ormond G. Smith and John R. Coryell in 1886. Smith was heir to the New York City publisher Street & Smith, the early catalyst for dime novels and pulp fiction as far back as 1855. Smith wanted a private-eye or detective character similar to Old Sleuth or Old Cap Collier to star in various forms of media. The first Nick Carter literary appearance began in New York Weekly, September 18, 1886, in a story called "The Old Detective's Pupil" or "The Mysterious Crime of Madison Square." The serial ran 13 total installments with the setting mostly being Victorian-Edwardian New York.

Carter is described as 5' 4" and having bronze-skin, gray eyes, dark hair and a square jaw. The character was trained by his father, Old Sim Carter, to fight criminals, essentially becoming the opponent of global evil. He's a genius that is inhumanly strong and a master of disguise. The character was so popular with readers that Street & Smith created the Nick Carter Weekly dime novel series. These stories would later be reprinted as stand-alone titles under New Magnet Library.

With its premier issue on October 15, 1915, the Nick Carter Weekly publication transitioned into Street & Smith's new Detective Story Magazine (just 10-cents twice a month!). The magazine ran 1,057 total issues, most of which concentrated on short crime-fiction with appearances from pulp heroes like The Shadow. The magazine's first 20 years featured covers by illustrator John A. Coughlin. In 1935, the magazine began suffering financial stress and officially stopped publishing in 1949. 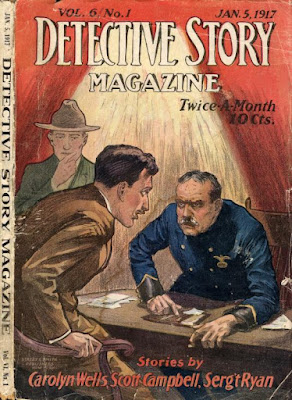 Between 1924 and 1927, Street & Smith attempted a revival of the Nick Carter character in the pages of Detective Story Magazine. These stories also featured many of the same villains that Carter had faced in the prior Nick Carter Weekly publication (Dazaar the Arch-Fiend, Dr. Quartz, etc.). It seemed as if Carter's appearance in literature was over in 1927, but due to the success of The Shadow and Doc Savage, Street & Smith revived the character again. Between 1933 to 1936, the Nick Carter Detective Magazine was published. These stories introduced Carter as a more traditional hard-boiled detective.

The pulp version of Nick Carter continued in comic book form, with appearances in The Shadow, Army & Navy, and Doc Savage comics from 1940 through 1949. There was also a 1972 Italian comic strip and a Nick Carter comic book series from 1975. It lasted 12 issues and stars a character named Nick Carter that is a British soldier in WW2. However, it is not related to the Nick Carter spy series. 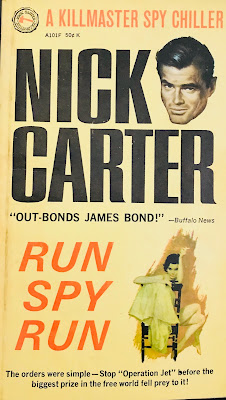 Little did fans know that a British secret-agent named James Bond would play a part in reviving the literary character 37 years later.

In the 1960s, Lyle Kenyon Engel began his plunge into paperback publishing. He was heir to his father's magazine publishing company, but sold that to become a publicity agent (supposedly one of his clients was the Today Show) and also a producer of children's records. To make an impact in publishing, he revived the familiar character of Nick Carter to capitalize on the 1960s spy fiction market.

Nick Carter: Killmaster debuted in 1964 as a marketing attempt to cash-in on Ian Fleming's James Bond. The character was reinvented as a secret agent instead of a detective or private-eye. These novels were to be international adventures with a more robust approach compared to the serials, pulps and dime detective magazines. Basically, everything prior to 1964 was erased and this series was a complete reboot. 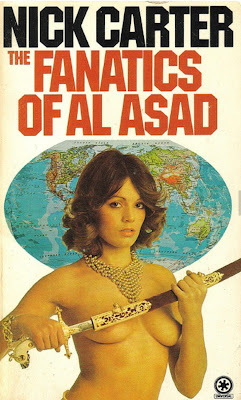 The general theme is that Nick Carter is an American secret-agent or spy working for an organization called Axe. The organization's leader is David Hawk. Axe and Hawk work closely with the American government and Hawk answers to "The Chief", presumably the U.S. President. Carter is referred to as N3 and we know there are other agents like him, also known as an N/number combination. In the first book, Run Spy Run, readers learn that Carter served in WW2 and also worked for OSS, the pre-cursor to what is now known as the CIA (like Matt Helm). Read our review of the book HERE.

One of the predominant characteristics of this version of Nick Carter is the three weapons he uses in the field. In the debut novel, it is explained that Carter took a Luger handgun from a German SS officer he killed in Munich during WW2. Carter named the gun Wilhelmina and it's included in nearly every novel. Hugo is the name for his Italian stiletto. He also carries a marble sized gas pellet that goes by the name Pierre. Carter can twist each half of the marble in separate directions and it will release a deadly toxin within 30-seconds, giving Carter enough time to flee the area.

The Nick Carter: Killmaster series became immensely successful, running from 1964-1990 and offering 261 total novels. Each book on average sold 115,000 copies. Ironically, the series just lists Nick Carter as the author. The real authors aren't credited on the book's copyright page, a painful trademark of the series that frustrates readers, fans and collectors to no end. Engel typically split 50-50 with the authors he hired. He demanded lightning fast work, sometimes novels written in less than three weeks to meet furious deadlines. These books were released monthly, first by Avon and then later by Charter.

-Popular crime-fiction author Lionel White authored one Nick Carter book, the 18th installment from 1966. This was his second foray into spy fiction. He also wrote a stand-alone novel called Spykill under the name L.B. Blanco.

- Jon Messmann wrote 15 installments. Messman was a heavy contributor to action-adventure paperbacks. He was behind the popular adult western series The Trailsman along with the short-lived series titles Handyman: Jefferson Boone and The Revenger.

- George Snyder did 8 installments. He also wrote novels for the Grant Fowler series.

- Ralph Hayes authored 8 volumes in the series. He is known for his John Yard: Hunter series and Check Force among others.

- Martin Cruz Smith wrote 3 installments. Smith is primarily known for his Arkady Renko series that is still current to this day. The 1983 film Gorky Park was an adaptation of that series debut.

- Surprisingly, Chet Cunningham only wrote 1 book, # 72 Night of the Avenger, that was co-authored with Dan Streib.

- Dennis Lynds authored 9 and his wife at the time, Gayle Lynds, wrote another 4. I've read one of Dennis Lynds' novels and I really enjoyed it. It was #211 Mercenary Mountain and it is reviewed HERE. Many will know Dennis Lynds as American author Michael Collins. He wrote the popular Dan Fortune series before his death in 2005.

- Saul Wernick wrote 5. Many remember him as writing the first Mack Bolan novel after Don Pendleton sold the series to Gold Eagle.

- Jack Canon is the heaviest contributor with over 30 installments. I lost count, but I think it was 35. Not to be confused with Nelson Demille pseudonym Jack Cannon.

- There are numerous authors that authored three or less that I haven't mentioned, but you can find a detailed list on spysandgals.com or Wikipedia.

- There is yet another Nick Carter series that ran from 2011-2019 called Project. It's written by Alex Lukeman and again features a starring character named Nick Carter that is an anti-terrorist sort of hero. Again, not related to the Nick Carter spy series.

Lyle Kenyon Engel would go on to create Book Creations in the 1970s. Ultimately, it was a cash cow and a rather unique company. Engel would create a series, imagine the story, hire authors to write it and even create book cover art. Then he sold these to various publishers. He was the paperback king and died a multi-millionaire in 1986.

You can listen to the Paperback Warrior Podcast episode dedicated to Nick Carter HERE and the episode spotlighting Lyle Kenyon Engel HERE.