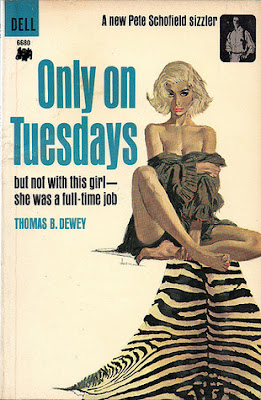 Paperback Confidential by Brian Ritt is my favorite reference book about vintage crime-fiction. In browsing the book (published by our good friends at Stark House Press), I was able to locate a lot of information about an underrated author named Thomas B. Dewey. He authored 36 novels and a handful of short stories between 1944 and 1969. He also wrote a number of stand-alone novels using the pseudonyms Thomas Brandt and Cord Wainer. For this Primer, I'm using the information I discovered in Ritt's book, so all credit goes to him.

Thomas B. Dewey was born in Ekhart, Indiana in 1915. Dewey graduated from Kansas State Teachers College in 1936 and attended grad school at the University of Iowa. After grad school, he moved to Hollywood to find his fortune working for a correspondence school called Storycraft. In 1942, he moved to Washington, DC to be an editorial assistant for the U.S. State Department during World War 2. While working as a writer and editor for the State Department, he began writing novels as a side hustle.

Dewey's first published novel, Hue and Cry, was published in 1944. It was also released under the titles Room for Murder and The Murder of Marion Mason. The protagonist was a character named Singer Batts, a hotel owner and Skakespeare fan living in Preston, Ohio. He partners with his hotel manager, Joe Spinder, to solve the book's mystery. Dewey (or readers) liked the character so much that he wrote three other novels starring him - As Good As Dead (1946), Mourning After (1950), and Handle With Fear (1951). The books and character are similar to that of Rex Stout's Nero Wolfe series with Spinder serving as the narrator like Archie Goodwin's role in the Nero Wolfe books. You can obtain the four Singer Batts books through Wildside Press HERE. 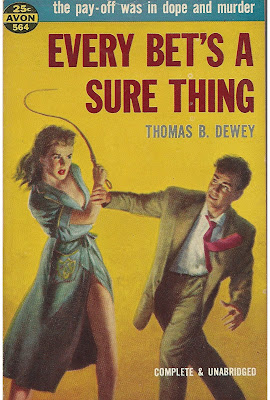 In 1945, Dewey leaves the State Department to go back to Los Angeles to work in advertising. It’s there that he marries his first wife, Maxine Morley Sorensen, in 1951. It was during his advertising years that he launched his most popular series starring a Chicago private eye named Mac – the reader never gets to know his full name. The first Mac book, Draw the Curtain Close, was published in 1947. It took Dewey six years before the second Mac installment was published, Every Bet's a Sure Thing. Our review of the book is HERE. Remarkably, the Mac series continued for 17 novels with the last installment being The Taurus Trap in 1970.

Mac is often described as “The Compassionate Private Eye”, a true statement that also understates that Mac can, and does, kick some serious ass when called upon to do so. His compassion as a character really humanizes him in the body of his first person narration. But these books shouldn’t be confused with soft-boiled cozy mysteries. They are top-notch private eye stories. I’ll be reading and reviewing more Mac books here at Paperback Warrior, and he may turn out to be my favorite private-eye series. Wildside Press has reprinted most of these for $5 or less per book HERE.

Dewey quit his job in advertising to write full time in 1952, a steady gig he continued until 1971. In 1957, Dewey launched his third series character, a San Fernando Valley private-eye named Pete Schofield. The first book in the series was And Where She Stops (1957). That series continued for nine total installments through 1965’s Nude in Nevada.  The gist of the series is that Schoefield solves crimes with his adorable redhead wife Jeanne. Once again, Wildside Press has these available as well HERE. 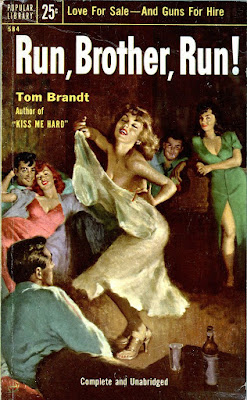 The usual trajectory of an author of this era is to write a lot of stand-alone novels, hone their craft, and then launch what they hope will be a successful series. Dewey did it backwards launching three successful series titles right out of the gate and keeping Mac and Pete Schofield alive at the same time.

He did write a handful of stand-alone novels – a couple under his own name - but he also deployed two pseudonyms in the 1950s. This was a pretty common way either to get some extra work on the side without your publisher knowing or to ensure that you aren’t flooding the market and hurting your own brand.

Dewey’s last novel was published in 1969, and then it appears he retired from writing fiction at the age of 54. In 1971, he became a professor of English at Arizona State university, where he taught writing. In 1972, he married his second wife Doris L. Smith, and the author died nine years later in 1981 at age 66.

Hollywood never adapted his work for the big screen, but two of his novels were made into TV episodes:

Bob Hope Presents The Chrysler Theatre
"Runaway" (1964)
Based on “A Sad Song Singing”
Cannon
"Death's a Double-Cross" (1971).
Based on the novel Every Bet's a Sure Thing
Posted by Paperback Warrior at 6:00 AM