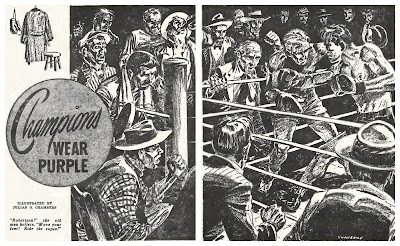 Oklahoma native Clifton Adams authored over 50 full-length novels and around 125 short stories for the magazines and digests. His first professional sale was the short story “Champions Wear Purple”, published in Adventure in January, 1947. Being a huge fan, I tracked down a copy of the magazine online and was surprised to find that it is an Oklahoma Wildcatter boxing story. Loving both boxing and Clifton Adams, it was a match made in Heaven.

In the story, an unnamed narrator tells the reader that he's an oil-rig worker on the Woodard Wildcat. With his throat as “dry as an Arizona test hole”, he strolls into Bert Harrison's Beer Hall to tip a few pints with his co-workers. While there, a young man walks into the bar carrying an Army duffel-bag. When he orders a glass of water, the narrator steps in and offers him a drink. But, the kid says he doesn't drink, but would like to locate a man named Winters.

The narrator takes a moment to explain to “The Kid” that Winters is the old guy sitting by himself at the bar reading an out of town newspaper. The narrator explains to the reader that Winters has never been known to say a nice thing and the only time he opens his mouth is to curse at someone. The Kid walks over to Winters and introduces himself as Lee Robertson. He explains to the old man that he was in France fighting the Germans with a guy named Pete. Before he died, Pete told Robertson to find Winters because he could make a fighter out of him. Winters, shocked and dismayed to learn that Pete was killed, yells at Robertson and told him to get out. 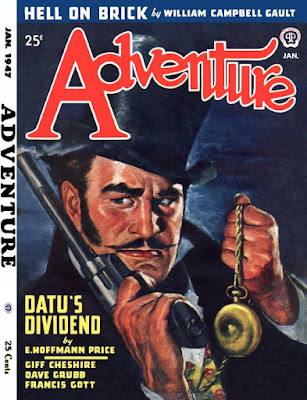 The narrator, feeling sorry for Robertson, chases him down in the street and offers him a job on the oil-rig. While Roberson contemplates joining the crew, the narrator advises readers that Winters and Pete were like father and son, and that Winters was Pete's boxing trainer. Upon the verge of becoming the light-heavyweight champion of the world, the war came along and took Pete away. Now, Pete is dead and Winters is left to ponder what might have been. Robertson agrees to join the oil-rig crew, but also takes an offer to fight in the town's arena.

Robertson becomes the local boxing hero and a real friend for the wildcatters. They make Robertson their new hero and he earns their accolades by knocking out the competition on regular Wednesday night fight cards. Winters on the other hand despises Robertson and won't offer a single word of encouragement to the young man. At the bar one night, the bets begin rolling when Winters finally says, “There's a man in Hobartsville he can't beat.” Winters bets all of them that Robertson will lose to the fighter. The match is then set and Robertson discovers that the Hobartsville fighter is a former pro that almost became a world champion. With his respect and fistfuls of cash on the line, will Robertson beat this seasoned, experienced opponent?

There was so much to enjoy about this story and I love how it all ties into a purple ring robe. In just a few pages, Adams forces the reader to care about these characters. There are a number of underlying elements that make this story exceptional. First and foremost, the idea that Winters only hates Robertson due to Pete dying. He nearly begs for it to have occurred the other way around with Pete living and Roberson dying. Second, I love that Robertson, despite being floored by Winters' disrespect, still soldiers on and continues his dream. The in-ring action was superb with a number of rounds described in great detail. If you love boxing, you will appreciate these swift scenes.

From the narrator's cool, laid-back presentation to Robertson's fighting skills, "Champions Wear Purple" is a real treat. Despite it being his first published work, it is easy to spot Adams' storytelling talents. He was destined for greatness and this story is just a small preview of what was to come. You can read the entire Adventure issue, including this story, for free: