Girl on a Slay Ride 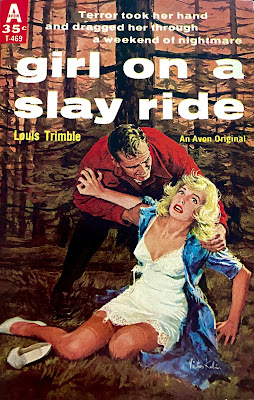 Louis Trimble (1917-1988) was a Seattle author that specialized in science-fiction, western, mystery, and espionage genres. He wrote under multiple pseudonyms and has been reprinted numerous times. In 2012, Prologue Books reprinted his crime-noir novel Girl on a Slay Ride, originally published by Avon in 1960.

Cliff Mallory is employed as a salesman, but is described by another character as a high-class messenger. The term fits considering Mallory has a briefcase containing $40,000 in securities that he needs to deliver to his boss in Port Angeles, Washington. After the drop, Mallory is headed into the state's Olympic Mountains to enjoy his favorite pastime, camping and fishing. But, his plans take a detour when his ex-wife Denise calls asking for a favor.

After picking Denise up at the Portland airport, she advises Mallory that she's on the run from her husband and his Syndicate cronies. Her husband fears that she knows a little too much about his business dealings and wants to snuff her out. Denise called the only person she ever truly loved for help. Mallory and Denise head to the coast highway and follow it through the fog and dense forest to a small-town motel. After sensually making up for lost years, Mallory sees two men in the parking lot that he knows must be on to them.

Back on the rural highway, Mallory and Denise are intercepted by a man calling himself Graef and two other guys. But, Mallory can't figure out if they are after Denise or trying to rob him of the $40K. The three thugs escort Mallory into a coffee shop where a newspaper shows Graef's photo and the ominous headlines that he is a rapist and kidnapper that has escaped from jail after killing a deputy. Quickly, Trimble's crime-noir escalates into a psychotic suspense thriller as Mallory and Denise try to escape this horrible scenario.

In some ways, I think Trimble combined a rugged, outdoor modern western with a crime-noir to create this very unique novel. It features a long chase through the pines and snow, with tracking, guns, and a survival element built in. But, the author isn't content with just that. Instead, he injects this frantic sense of suspense and mystery because everything isn't what it appears to be. I was thrown off by the story's twist and had to re-read certain chapters just to be sure I was clear on who's betraying whom. I applaud the originality and presentation, but there's a lot going on that requires some serious page dedication.

Girl on a Slay Ride was a terrific, fast-paced narrative with plenty of action and intrigue. Trimble reads like John D. MacDonald here and I can't help but think he was slightly influenced by JDM's violent novel The Executioners (aka Cape Fear, 1957). It has the same intensity with one unforgettable character that is a repulsive, psychotic savage that preys on young girls. The original paperback's cover (Victor Kalion) conveys the emotional terror. What you see is exactly what you get. Recommended!