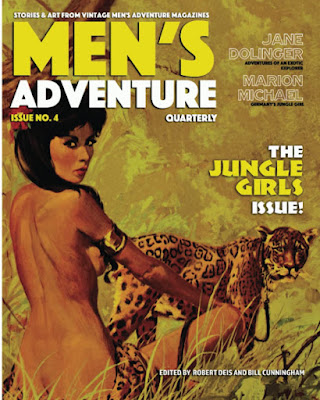 Robert Deis and Bill  Cunningham have been doing God's work with their Men's Adventure Quarterly publication. It's an old-school throwback to the men's action-adventure magazines (MAMs) of the early to mid 20th century. The magazine's debut was in 2021 and featured westerns as the theme. The second issue focused on espionage and the third installment contained stories around vigilantes. This fourth installment is “The Jungle Girls Issue!”

In the opening pages, Deis authors “It's a Jungle Girl Out There!”, a great article examining the origins of the “jungle girl” stories in fiction, magazines, and comics. Deis cites two of the genre's earliest works, H. Rider Haggard's 1886 novel She and William Henry Hudson's 1904 novel Green Mansions. I enjoyed the timeline Deis presents from these novels, including Edgar Rice Burroughs' Jungle Girl in 1932 and the 1940s/1950s movie serials and comics starring Nyoka the Jungle Girl. The introduction expands into the variations and eras of Sheena, Queen of the Jungle. It was a real education for me learning the concept of “jungle girl” and its place in literature and pop-culture.

The magazine dedicates 50+ pages to model, author, traveler, and icon, Jane Dolinger. Deis interviews Lawrence Abbott, author of the book Jane Dolinger: The Adventurous Life of an American Travel Writer. Throughout the interview, Abbott provides Dolinger's history from pin-up model to her books like The Head with the long Yellow Hair (1968) and Jaguar Princess (1964). It was interesting to learn her backstory, the travels, and about her marriage. Many of her articles and columns are reprinted, including "I Helped Shrink a Human Head" (Champion 09/1959), "I Found the Jaguar Princess" (Adventure 04/1965), and "The Jungle Killers Who Fight for Women" (All Man 05/1963). I found "Around the World with Jane and Camera" (Wildcat 07/1966) as a terrific insight into her traveling experiences in rural locations and hostile jungles. She led an incredible life and the magazine is loaded with gorgeous photos of her (NSFW).

Like prior issues, this issue is saturated with reprinted stories and art from vintage men's action-adventure magazines. First off is “The She-Wolf of Halmahera” (Spur 09/1959), a first-person account by Leonard Kelcey (not a real guy) who explains to readers his harrowing experiences in Indonesia tracking down a she-wolf/vampire seductress. “Yank Explorer Who Ruled Guatamala's Taboo Tribe” (For Men Only 08/1959) features cover art by the talented Mort Kunstler, which in itself is worth the price of admission, and interior art by one of my favorites, Gil Cohen. The story is written by Donald Honig, an author that Deis spotlights in the story's introduction page. Other stories include “Borneo's Topless Army” (True Adventures 10/1966, art by Vic Prezio and Basil Gogos) and “Forbidden Amazon Female Compound” (Stag 04/1968, art by Mort Kunstler).

The book includes pages upon pages of vintage MAM artwork, including a variety of stunning models from the era. There is also an article on Marion Michael, a German model and actress that starred in films like Liane, Jungle Goddess and Native Girl and the Slaver. The editors include lobby card and movie poster artwork featuring Michael as well as a number of photos.

Men's Adventure Quarterly #04 looks absolutely fantastic on paper (wink wink). As an educational tool, Deis and Cunningham provide an academic approach to this genre and I learned a great deal more about the MAM industry and culture. Each issue of MAQ continues to improve and expand while also rekindling the same fires stoked by the legions of creators, artists, writers, publishers, and fans that came before it. Deis and Cunningham's collaboration is pure dedication to the spirit and heart of MAMs and I absolutely applaud their efforts.