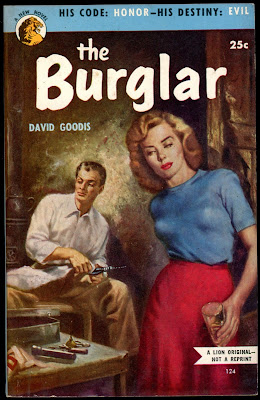 As a career midpoint, The Burglar exemplifies everything we've grown to appreciate and admire about David Goodis. It was originally published as a paperback original by Lion Books and later reprinted by Black Lizard, Simon & Schuster, and a host of others. Goodis wrote the screenplay for the film adaptation, making it Goodis' only solo authored screenplay to actually be produced. The film was released in 1957 and starred Dan Duryea and Jayne Mansfield. In 1971, the French continued their fascination with the author by remaking the film with Omar Sharif and Jean-Paul Belmondo in starring roles.

In flashback sequences, readers learn that Harbin experienced a poverty-ridden childhood. After his mother and father both die, Harbin hits the road and is picked up by a professional thief named Gerald. Harbin learns to become a skilled burglar under Gerald's tutelage. After Gerald is killed, Harbin is left to raise Gerald's young daughter Gladden. Over 18 years, Hardin's role transforms from Gladden's older brother to father, bringing the novel to the present with Hardin at age 34 and Gladden now 24.

The opening chapters is a suspenseful heist as Harbin and his crew (two men and Gladden) rob a large mansion on Philadelphia's Main Line. The take is a whopping $100K in emeralds. But, the robbery didn't go as planned due to Harbin being interviewed by police outside of the mansion. Harbin miraculously explains his way out of the situation, but the police take note of his whereabouts.

Back at the crew's “home”, a place deemed The Spot, Harbin makes the decision to send Gladden to Atlantic City for a few days while their hot status cools down a bit. While wasting the days, Harbin strolls around Philly with no real destination in mind. He contemplates the next move and his relationship with Gladden. But, a knockout named Della approaches Harbin at a bar and the two immediately hit it off.

After a few chapters, Harbin and Della are in love and have the proverbial “white picket fence” lifestyle planned in the Pennsylvania countryside. The problem is multifaceted – Harbin has a criminal background that he needs to share with Della, he has a complicated relationship with Gladden that needs unraveling, and he has to leave the burglary business and his crew. The first one is easy, the second is an emotional implosion and the third becomes central to the book's propulsive plot.

As always, Goodis is one of the masters of crime-noir storytelling (arguably the very best) and The Burglar is about as good as it gets. The characters are dynamic, with each one facing extreme adversity while carrying heavy burdens. Both Della and Gladden are in love with Harbin, but his decision to choose one not only has a lasting impact on his own life, it controls the fate of the heist crew. There is the obligatory “running from the law” plot threads that keep the narrative at a brisk pace.

I like the author's subtext that theft is like a drug. It brings these characters emotional peaks and valleys while insuring they avoid the rat-race of a 9-to-5 job. At one point Harbin admits he has nothing he wants or even desires. He can't locate any material objects to buy with his $7K in walk-around money. Much less, where to spend his share of $25K from the most recent heist. It's not about the money, it's the adrenaline rush.

If you just love a great story, The Burglar is absolutely fantastic. As a mid 20th century crime-noir, it's sheer perfection. Tangled love, the burden of criminality, greed's fascinating tug-of-war, flawed justice, the price of happiness, these compelling, prevalent plot-points just go on and on. Excellent books create meaningful discussion and The Burglar does just that. Highest recommendation.