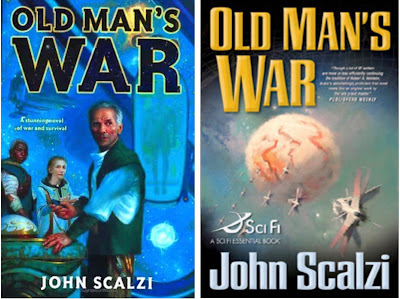 Old Man’s War by California author John Scalzi is one of those books that often appears on lists of the "Greatest Science-Fiction Books of All Time." The novel was first published as a serial and released as a book in 2005. The novel was nominated for a Hugo Award and inspired multiple sequels.

It’s about 200+ years in the future, and Earth is engaged in a forever war with several alien races in colonized interstellar space. However, Earth’s military doesn’t want strong, young soldiers. Instead, they want senior citizens for reasons the novel will make clear to you when you read it. If a volunteer oldster serves in combat for two years and survives, the senior is awarded a sizable plot of land on one of the many colonized planets. They also get some life-extending medical procedures, so they don’t keel over on the battlefield. Extending life in exchange for dangerous combat is a good deal for the elderly looking into the Great Beyond.

Enter John Perry, our narrator. He is a 75 year old widow living in Ohio that is now joining the military. The idea of extending his life and leaving Earth behind forever seems like a good idea. The catch is that you can never return, nor can you have any contact with the people you leave behind. As a result, information about combat as part of the Colonial Defense Force is spotty. You need to sign on in a leap of faith to learn the whole scoop.

The geopolitics of Earth’s space colonies are pretty fascinating and also best left explained in the novel. Same for the inventive physics devised by the author to catapult senior citizens into the far reaches of space. I also wasn’t expecting how funny the book would be. The narrative voice of John Perry reminded me of Andy Weir’s novels The Martian and Hail Mary. It’s the kind of science-fiction that doesn’t ask too much of the reader as the world-building is so smooth and effortless to read.

The Colonial Defense Force has many of the hallmarks of our own military culture with intensive training by intense drill sergeants. It’s only when the oldster soldiers are briefed on their mission and the enemies they will be encountering that it becomes clear that this isn’t going to be a walk in the park. By the time you actually get to combat battles, you’re in for a real treat (think of the film Starship Troopers).

The many battle scenes will please action-adventure paperback fans, and this is a perfect novel for people curious about science-fiction who don’t know where to begin. Overall, Old Man’s War is an absolute winner and I look forward to exploring the sequels.