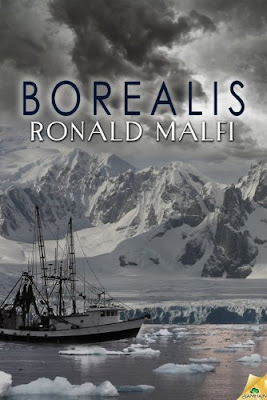 Horror author Ronald Malfi seems to have made his way into the mainstream. I recently found a copy of his haunted house novel Little Girls sitting on an end cap at Target. I remember singing the author's praises in the 2000s and I'm happy his literary career is beginning to take off. In the early days, Malfi was published by the likes of Dark Fuse and Samhain Publishing. I had been saving Borealis for a rainy day. It's an 80ish page novella originally published in 2009 by Samhain and the weatherman says we are in for a storm. The time has come.

The book begins with a man named Bodine urgently driving a young girl to a rundown Las Vegas motel. Immediately, something is amiss with this bizarre child. She tells Bodine she doesn't have a name and doesn't have any parents. She's giddy, mischievous, and just downright scary. Shockingly, Bodine retrieves a handgun from his waistband with the intention of murdering the girl. The scene then transforms into the morning after with the town's sheriff finding Bodine's brains on the bathroom wall in an apparent suicide. The girl is gone and that was twelve years ago.

Present day, protagonist Charlie Mears is smelling the diesel fumes of a fishing trawler. He's been on board the Borealis for seven days pulling cages of crabs from the seabed. It's a hard blue-collar life made even harder by the harsh landscape. The crew is in the icy Bering Sea, hundreds of miles from the coasts of Alaska. After a long day of trawling, Charlie looks out into the glaciers and spots a young naked woman running on the ice. The crew stops to make the rescue.

On board, fed, warmed, and clothed, the crew provides her the Captain's quarters. But one crew member says something isn't right about her, that he has a bad feeling in her presence. When they ask the woman what her name is, she coldly explains she doesn't have one. She also can't explain where she came from. When one of the crewmen is found dead, the story takes a darker turn. Who is this woman? Or, better yet, what is this thing?

I've always loved cold weather stories that include nautical adventure or survival. That also includes atmospheric horror novels or movies set in frosty locations. As a fan of John Carpenter's film The Thing (based on a movie that was based on a short story), I found that Malfi's storytelling skills possess that same tone – the isolation, cold fear, and survival element. This little girl – young woman -  is just so damn creepy and it gave me chills when she tells Charlie things about his life that she has no way of knowing. The story also reminded me of Stephen King's great screenplay Storm of the Century. Malfi's escalating tension into total panic works on so many levels. It's visceral violence, psychological horror, and haunting suspense all aboard a stationary broken boat. The perfect nightmare.

I wish Borealis was still available for purchase. At the time of this review, the novella remains out of print. Wolfpack Publishing, Brash Books, Stark House...here's your chance! This story deserves an audience.