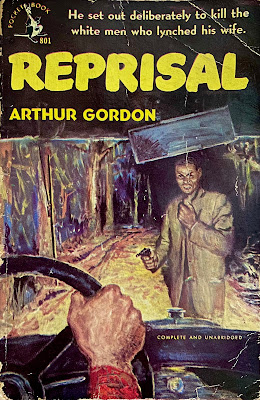 Arthur Gordon (1913-2002) was a Yale graduate and Rhodes scholar that fought in WW2 and later became an editor for slick magazines like Good Housekeeping, Cosmopolitan, and Guidepost. His family has a rich lineage in Georgia. His aunt created the Girl Scouts organization and his great-grandfather started the Central of Georgia Railroad. His literary work includes the military-fiction novel Target Germany, A Song Called Hope, and an acclaimed biography about Norman Vincent Peale.

My focus is on his only crime-fiction novel, Reprisal. It was originally published in 1950 as a hardcover by Simon & Schuster. Its success warranted a second printing by the publisher. In 1951, the novel was published in paperback by Pocket Book (#801) with a cover by Harvey Kidder (he painted the cover of another book we reviewed HERE).

The book's synopsis, printed on the back cover, peaked my interest. It says:

My name is Nathan Hamilton. I am black. My wife has been lynched! God knows what they did to her before they tied her to a tree and riddled her body with bullets. The killers were tried by jury. They were acquitted. Every white man in Hainesville knows that these men are guilty. But the town wants to forget. I can't forget. They lynched my wife because they know they could get away with it! They were sure nothing would happen! But something can happen. Something will happen! I'm starting for Hainesville tonight. There's a loaded gun in my valise with a bullet in it for each man who had a hand in the murder of my wife!

The book begins in a courtroom as the judge and counsel tensely await a jury's verdict. Three white men are on trial for the heinous murder of four African-Americans in the small, southern town of Hainesville. When the jury reconvenes, they find the men not guilty despite evidence that proves otherwise. The judge provides a verbal scolding to the courtroom and cautions the jury that he's ashamed of the justice system and the events that have unfolded to allow the men to walk free. 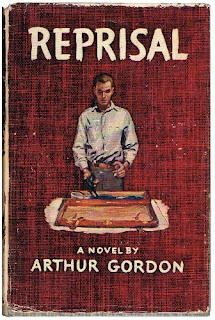 Gordon then begins introducing various characters and side stories that ultimately make up Hainesville. The main character is Melady, a brave reporter from the North that's covering the trial and its aftermath. He attempts to remain somewhat neutral early on, but by the book's end, he becomes heavily involved. Unity is another star, a receptionist who is involved in a relationship with a very bad man named Shep. Perhaps the most influential character is Yancy, an admirable African-American undertaker that tries to be the peacekeeper in the black section of town. Threading the characters is Nathan, a black man now living in New York after his wife was raped and murdered in Hainesville. Once he learns of the trial's outcome, he travels south with a gun.

There is way too much to unpack in one simple blog review. Reprisal is nearly 300-pages and has a character list that seemed a mile long. It's a lot to keep up with, almost like watching an entire season of Game of Thrones while running an org chart. There are affairs, attacks, backwoods justice, romantic relationships forming and ending, scandals, jobs, families, news-hounds, and so forth. It's daunting at times, but the investment is worth it. All of the stories tie together to present a turbulent era in the deep South.

Surprisingly, Reprisal isn't as well known as Harper Lee's To Kill a Mocking Bird, predating it by 10 years. That could be due to the length, the complexity of the characters, or the amount of sheer violence that Reprisal possesses. The central theme is revenge, similar to a dusty western tale as the protagonist hunts the killers. There are no real heroes, only misfortune and death told in a doom 'n gloom style by Gordon. Shockingly, I found passages that I re-read numerous times due to their similarities to what we still experience today. Reprisal is a prophetic, iron-fist look at the heart-wrenching extremes humans seek to hurt one another. While never preachy or condescending, Gordon presents a fictional account of real-world violence, then and now, that leaves a distinct mark on the reader. It's a powerful novel.

Reprisal was adapted to film in 1956, but unfortunately it was poorly devised. The setting changed to the 1800s and the entire narrative was modified into a western revenge tale. Sadly, Reprisal has never been reprinted.

Note - The hardback version of the book shows the main character as a white man. It is evident that the cover is depicting Nathan as he is retrieving the pistol from his valise. I assume it was too controversial to put a black man with a gun on the hardcover?