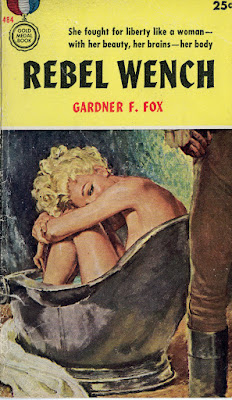 Gardner F. Fox (1911-1986) began writing for the comic book industry in 1937. Throughout his prolific literary career, Fox authored over 4,000 comic books and helped create characters like Hawkman and Flash. While reaching an iconic level within comics, Fox also wrote over 150 paperback originals encompassing genres like science-fiction, fantasy, western, and romance. I recently purchased a Historical Fiction ebook bundle from the Gardner Francis Fox Library. Included was Rebel Wench, originally published by Fawcett Gold Medal in 1955. The book is also available as a paperback reprint and also exists in digital through Wildside Press.

Despite the book's cover, the protagonist of Rebel Wench is Billy Joe Stafford, a plantation owner embroiled in the American Revolutionary War in 1781. In the character's history, readers learn that he is a third generation farmer that was taught to hunt and survive at an early age by a Native American. Stafford is respected by the slaves, including his lifelong servant and friend, Old Gem. His marriage to Laura Lee developed a large rift in 1777 – Stafford joined the Continental Army to fight for independence and Laura became a Tory in support of Great Britain.

The “rebel wench” of Fox's story is Deborah Treat, a beautiful spy working with the rebels under Brigadier General Daniel Morgan. In the opening chapters, Stafford rescues Deborah from the clutches of an evil brawler, a villain that appears repeatedly throughout the narrative. After dismissing Deborah as a prostitute, he soon learns that she is a sharpshooter, a cunning strategist, and a fierce lover. As an aid to Morgan's Rifles, Stafford and Deborah team up to infiltrate British forces controlled by Cornwallis.

Central to the plot is a striking love-hate relationship between Stafford and his wife Laura. Stafford wants Laura to join the rebellion, but she's in love with a British Colonel who hopes to take over the plantation once Stafford is killed. There's a bit of heated intrigue surrounding a lavish party where Stafford and Deborah pose as siblings to expose plans created by Cornwallis. In sultry style, Fox seduces readers with a few tepid sex scenes, most of which concern Laura's bedroom romps with both Stafford and the Colonel. My interest was the historical aspect and, for the most part, Fox fills the gaps with a great history lesson on battles and guerilla fighting between armies and divisions up and down America's Eastern Coast.

Rebel Wench would have easily appealed to the 16 year old boy in the 1950s or American soldiers serving abroad. With plenty of gunfights, fisticuffs, beautiful women, and galloping horses, Gardner Fox absolutely knew his storytelling strengths and what his fans were expecting. If you control your own expectations, there's nothing to dislike about this fun adventure. Recommended.