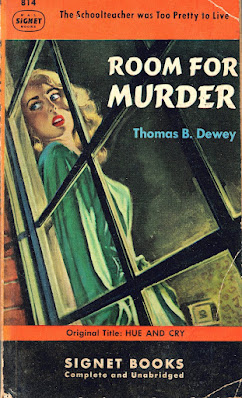 Thomas B. Dewey originally worked in Hollywood at a correspondence school called Storycraft. In 1942, he moved to Washington, D.C. to be an editorial assistant for the U.S. State Department during WW2. As a side hustle, Dewey began writing paperback original novels. Along with stand-alone titles, Dewey created three series titles – Mac, Pete Schoefield, and Singer Batts. In fact, his very first novel introduced the character of Singer Batts, a hotel owner in a small Ohio town that solves mysteries. It was called Hue and Cry in the U.S. and The Murder of Marion Mason in the U.K. Later, it was reprinted under the title Room for Murder. The book now exists in a bundle through Wildside Press with the other three series installments.

Dewey uses Rex Stout's strategy, and authors before him, to create a narrator that tells the tale of the formidable hero. Like Archie Goodwin's narration in Stout's Nero Wolfe detective series, Dewey uses a  character named Joe Spinder to narrate the story starring Singer Batts. The setup is quite simple:

Batts is a thirty-something scholarly fellow that has recently inherited the Hotel Preston from his late father Emory. The hotel is in the sleepy mid-western town of Preston, Ohio. The town's goofy marshal is Pete Haley, a friend of the hotel's staff. Batts resides at the hotel and leaves all of the heavy lifting to the hotel's manager and story narrator, Joe Spinder. The staff includes capable night clerk Jack Pritchard, sleepy day clerk Old Harry Baird, and janitorial laborer Nancy Wheeler.

Before all of the murdering, sleuthing, and solving, Spinder describes Batts in the opening pages: “Never wait for Singer Batts to ask a personal question. He doesn't operate that way. You live your life, he'll live his. It's only when there's something he thinks he's got a right to know that he'll ask questions. Then he'll ask plenty. Questions to drive you crazy.” 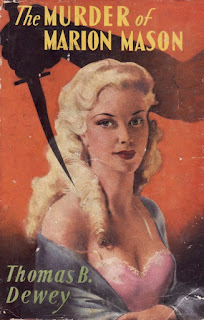 The book begins with two drunk young men being wrangled into the hotel by Pete. These are good 'ole boys that tipped a few too many bottles and Pete doesn't want to lock them up and ruin their family's good graces. Instead, he wakes up Joe and Batts and works out an arrangement for the boys to sleep it off in the hotel. The night gives way to the day and Joe leaves for errands in town. When he returns, there is a mob of people outside of the hotel and a corpse inside. A young woman named Marion Mason has been stabbed to death in her room.

Batts has the armchair detective tendencies, but isn't intimidated enough to just stay seated. When three lawmen from the state arrive, including the District Attorney, Joe goes into overdrive explaining the prior night's activities, the short list of guests, and that Marion Mason is new in town and a school teacher. But, Dewey paints the lawmen and the D.A. as the bad guys. They point fingers at Joe and things escalate into a physical brawl. The author doesn't beat around the bush and places a deadline on the novel: 24-hours to find the real killer or Joe is taking the fall.

Joe mentions other cases that Batts has solved, including one or two that foiled the same D.A. But, Batts doesn't want to solve crimes. He's content living in his small bedroom and just gazing through the window. Joe eventually talks him into action and the two start the investigation by interviewing various town citizens, including two specific men that Marion slept around with.

The case takes the mandatory twists and turns by leading readers out of Preston and into some seedy places out of town. The action and violence was a step up from what I expected and I really enjoyed Joe's wisecracking demeanor as the storyteller (he's really the show's star). He reminds me of Al Wheeler in the Carter Brown mysteries. Also, the language was surprisingly profane considering this is a 1944 novel.

Managing my expectations, I went into Dewey's first novel thinking it may be a quirky small town hotel mystery. It is, but it's written very well as Dewey proved he could write crime-fiction with the best of them. I really enjoyed this first Singer Batts novel and I'll check in at the front desk for three more nights: As Good as Dead (1946), Mourning After (1950), and Handle with Fear (1951).