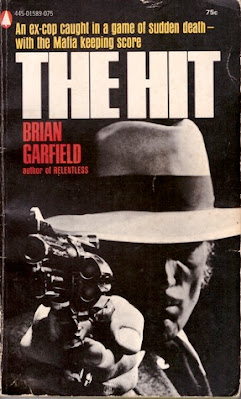 After authoring westerns for a decade, Brian Francis Wynne Garfield began writing crime-fiction in the 1970s. His pinnacle may have been 1972's Death Wish, but books like Relentless and The Three-Persons Hunt were stellar genre entries. Based on my research, 1970's The Hit may have been Garfield's first traditional crime-fiction novel.

At the relatively young age of 30, Simon Crane spends his days as an amateur geologist in the desert. Before his complacent lifestyle, Crane was an Army Intelligence Lieutenant, a collegiate baseball player, a newspaper reporter and a cop. On the beat, Crane was “accidentally” shot by his partner during a hardware store holdup. After taking two .357 bullets in the thigh, Crane is now on early retirement and disability, allowing plenty of time for rockhounding.

Crane's life is turned upside down when his former love interest, Joanne, shows up at his door with an incredible tale. She is employed as a secretary for one of the front businesses ran by the Aiello-Madonna-DeAngelo mob. Along with playing with Aiello's files, she occasionally allowed him to bed her down in his downtime. Due to the intimacy, Joanne knew that Aiello had over three-million dollars in his secure safe as well as incriminating evidence on lawmakers, politicians, mob members, and even herself. When she arrived at work that morning, Aiello was missing and his safe was open and empty.

Shortly after explaining to Crane that she doesn't know what to do about her situation, two mob enforcers appear and search Crane's house for any evidence that Joanne may be hiding. Doing the smart thing, Crane and Joanne go to DeAngelo and Madonna and explain that they had absolutely nothing to do with Aiello's murder. DeAngelo doesn't believe them and feels that Joanne sold out the mob and now she's been fed to them as the scapegoat. DeAngelo issues a deadly deadline: 48 hours to either bring the money back or prove that they didn't kill Aiello.

Garfield's short novel contains gambling, mobsters, double-crosses, car chases, and the obligatory “body buried at a road construction site”, all main ingredients of any great crime-fiction dish. The mystery aspect could be the fact that Crane is attempting to find the answer to save his own life. This is a genre trope of many 1940s and 1950s original paperbacks.

The Hit showcases Garfield re-creating the magic of crime-noir and makes both Crane and Joanne likable heroes throughout the propulsive plot. While there are a lot of characters to remember, the storyline and development isn't overly complicated or convoluted. Instead, this is just another good Brian Garfield novel with enough gritty violence and perplexing mystery to satisfy seasoned genre fans.