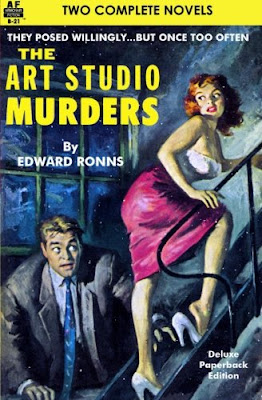 Philadelphia native Edward S. Aarons was a graduate of Columbia University, a WW2 veteran, and successful author. He wrote nearly 100 short stories between 1930 through the 1950s, but he's recognized for the two phases of his career. The first is his early crime-fiction, 20 novels published by the likes of Graphic, Avon, Fawcett Gold Medal, and Phoenix. The second phase is the Assignment series starring CIA operative Sam Durrell. I've been steadily plowing through Aarons' crime-fiction novels, mostly written as Edward Ronns, which brings me to his 1950 original paperback The Art Studio Murders. It was also published with various cover art as Dark Memory.

Henry Dana is a painter living in an art studio in New York City. After attempting to take the subway back home, Dana plunges from the platform and is nearly killed. When he wakes, Dana feels like this was no accident and believes someone is trying to kill him. Later, he discovers that his paintings have been slashed and he's attacked by an unseen intruder in his studio. An acquaintance named Lori calls Dana one evening and tells him she knows the identity of his attacker. But, in a familiar genre trope, she dies before Dana can gain the name.

Like Aarons' own career, the book has two very different stages. The first act takes place in New York with Dana avoiding death while also acquiring a lower commission for a painting. These scenes involve Dana's agent and friends, and introduces a “fatal attraction” scenario where his married friend Kay tries to seduce him. There's the typical police angle where they think Dana is under a lot of mental stress and his paranoia is wreaking havoc on his social existence.

The second stage is something I've talked about in numerous reviews of the author's work. This is all about location. In the second act, Dana decides to leave the city and head to Kettle Island, Connecticut to rekindle an old love affair with a recently divorced woman named Sarah. But, Dana's friends follow him to the island to enjoy a short vacation. Dana effectively brings his killer with him to the island. The author uses a harrowing thunderstorm to trap the characters on the island. Like most of his crime-noir novels,  Aarons' uses a waterfront setting as an integral part of the story – an abandoned lighthouse, windswept beaches, shoreline cottages.

The Art Studio Murders works as a suspenseful stalker novel. In the city, Dana's experiences with the killer in the darkened studio was like a horror movie scene. Aarons ups the ante by recreating that suspense in the second act, only making it more atmospheric and frenzied. The only real issue I had with the book is there are too many characters. In the early chapters, there are eight characters to contend with. Thankfully, the book has been reprinted by Armchair Fiction and the publisher has a handy checklist with short descriptions of each character.

The Armchair Fiction reprint is a twofer including The Art Studio Murders and an absolute gem by Mary Roberts Rinehart called The Case of Jennie Brice. I reviewed the latter work for Paperback Warrior HERE. There's no reason not to buy the reprint considering it's two great novels in one. At the time of this writing you can buy the reprint for $13 HERE.